France by bicycle.
“Ahhhh!”
Could there be anything more romantic?

The last Spanish sunset! Perfection (even if this shot was taken why cycling over yet another hill!!!!)

The old cathedrals and petit villages.
Baguettes and brie.
Pan eu chocolat and chocalatine.
Bonjours and bisous…
And mud!
So much mud !
So much rain!
And the cold….

…Cycling in all the clothes you own, most of which don’t come close to fitting you properly so you look as beautiful as a snow man fleeing a yeti. Actually, with my mangled mop of hair – I think you may actually confuse me as the yeti… 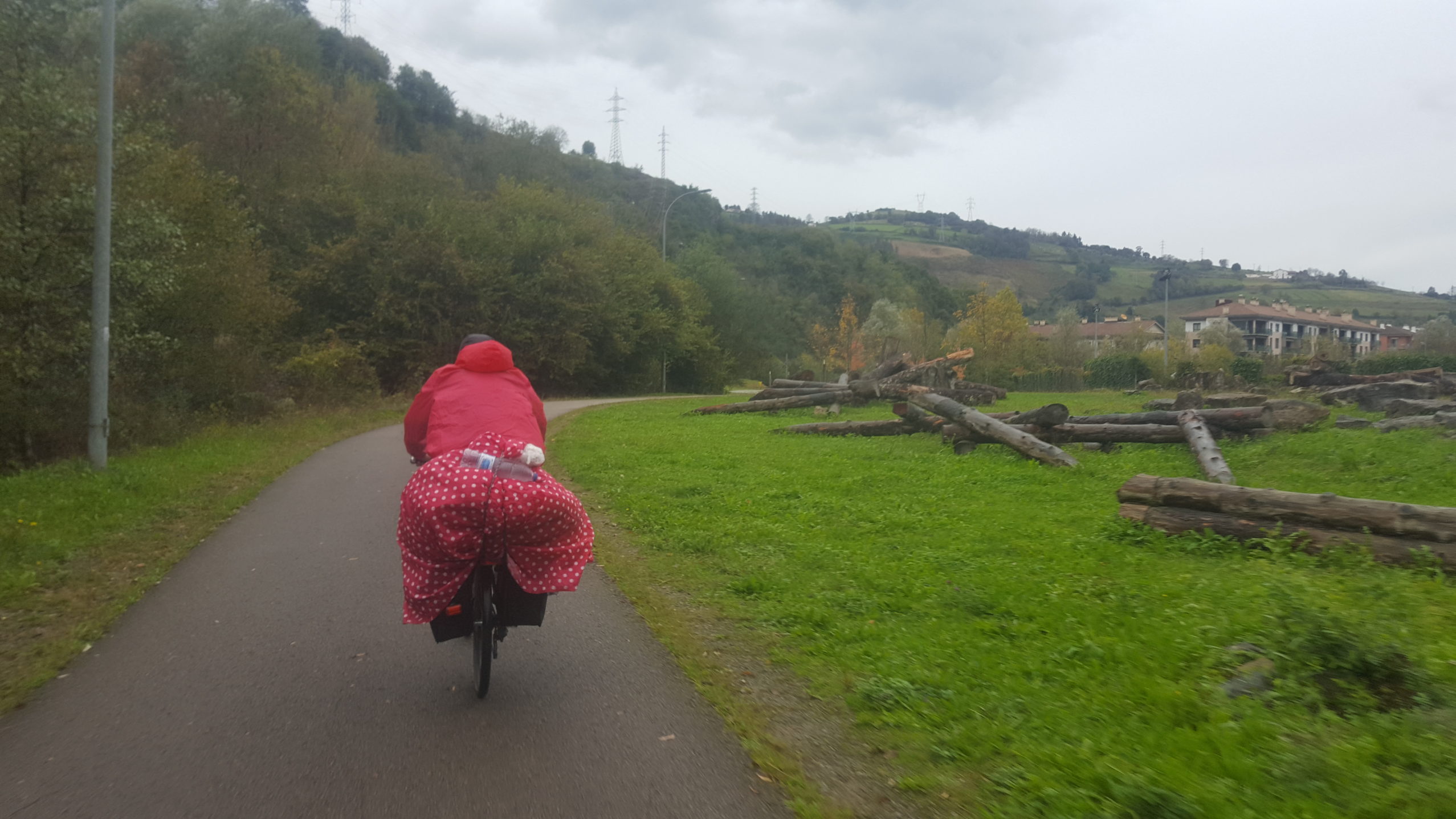 France came a little unexpectedly!
We got a sudden reply from a host and so, instead of spending a last day in Spain; we mustered up the strength to face a few more mountain-like hills and [after pausing at the last Lidl for a final Spanish beer] we crossed the border bridge into a whole new land!

Spanish mountains. The ones AJ stubbornly walked his bicycle over, while the smarter cyclist went around.

We could not have had a better arrival if we’d planned it!
[this is why it is normally better not to plan]
Good vibes, great people, and a feast of French awesome!

But with our arrival, came the rain!
We cycled on wet, but didn’t mind too much for the bumpy trafficed roads we were accustomed to, transformed to pristine bike paths and more fantastic people lined our paths, taking us in to shelter us from the elements! 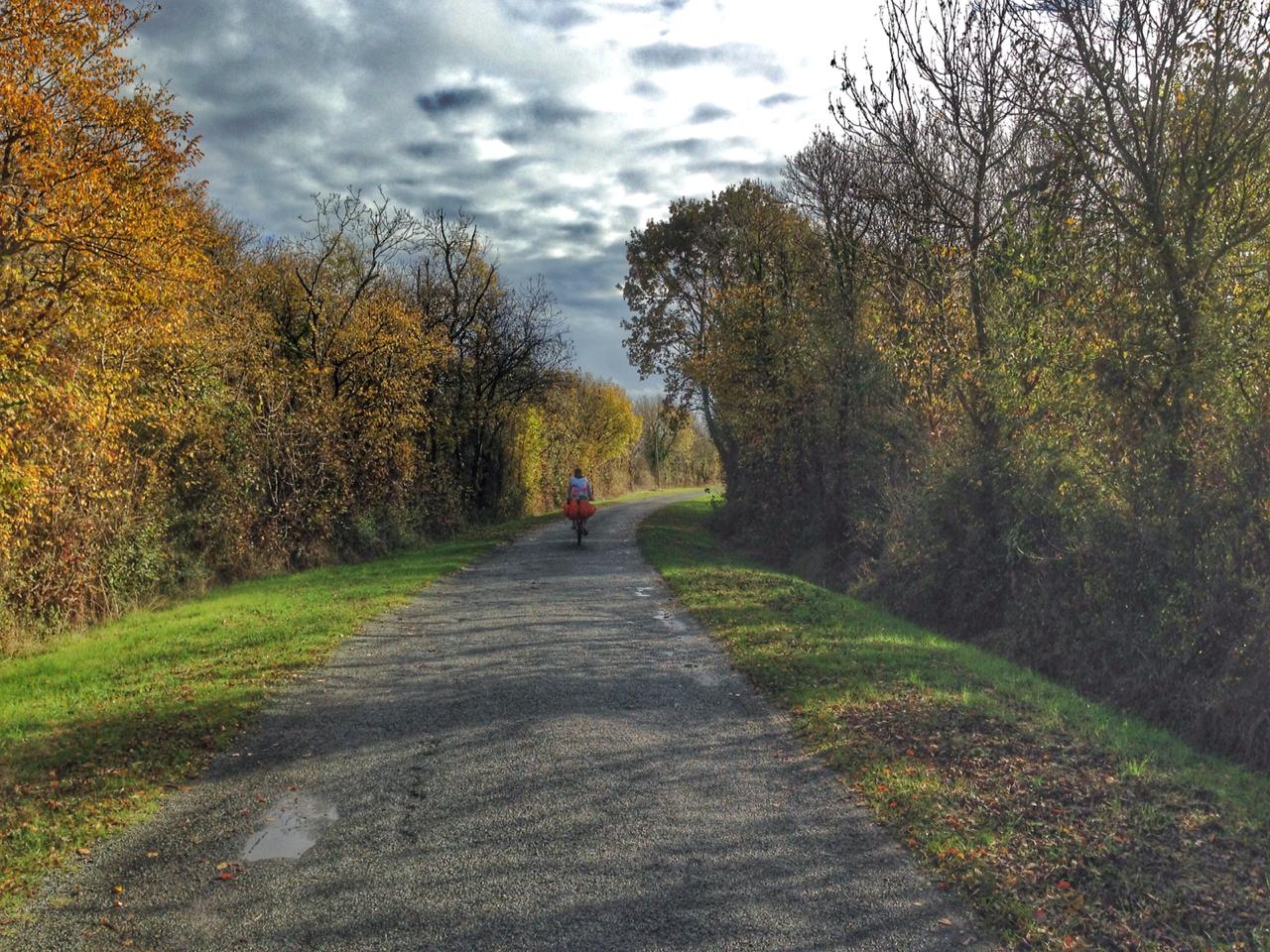 After a rest day near Bordeaux, we were clean and restored and ready for almost anything!
Or at least we thought we were…
[and we may have been a bit cocky about it too] 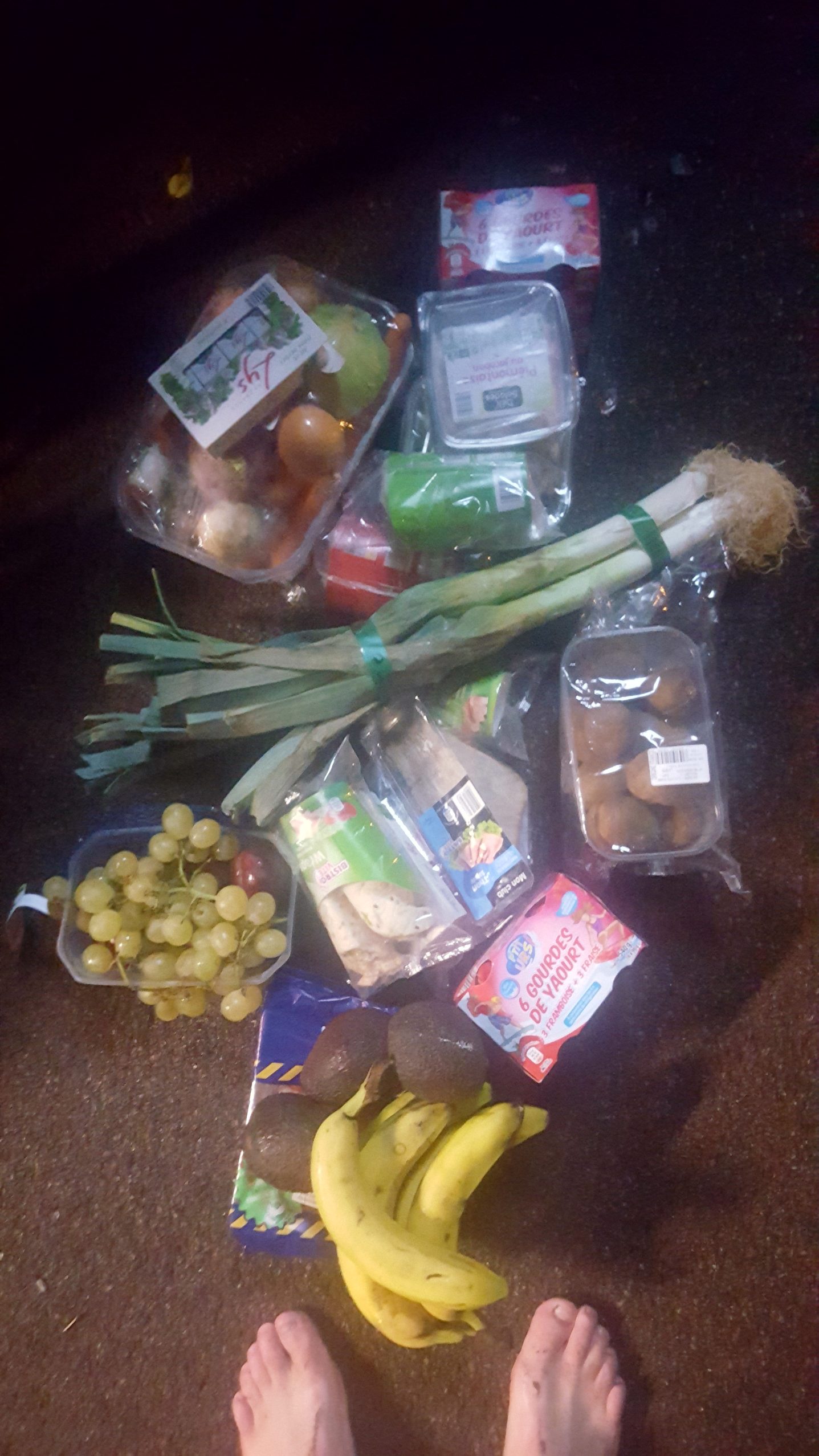 A new-found appreciation for dumpster diving!

We became professional dumpster divers and gleaned exquisite meals our daily per diems would never have afforded.
We mastered the knack of finding secluded sheltered camping spots to protect us from the wind and rain and fog.
We made France our bitch!!! 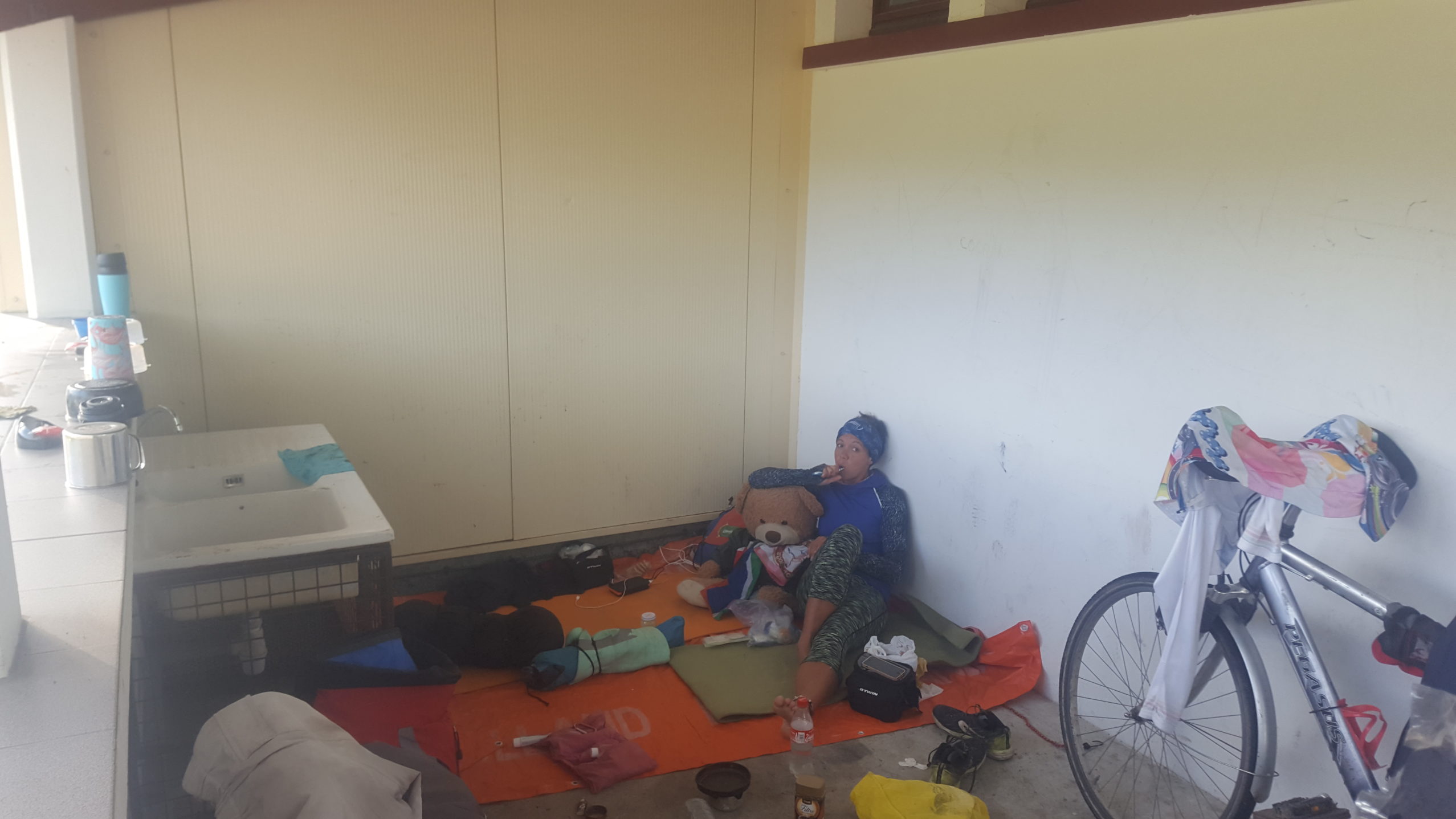 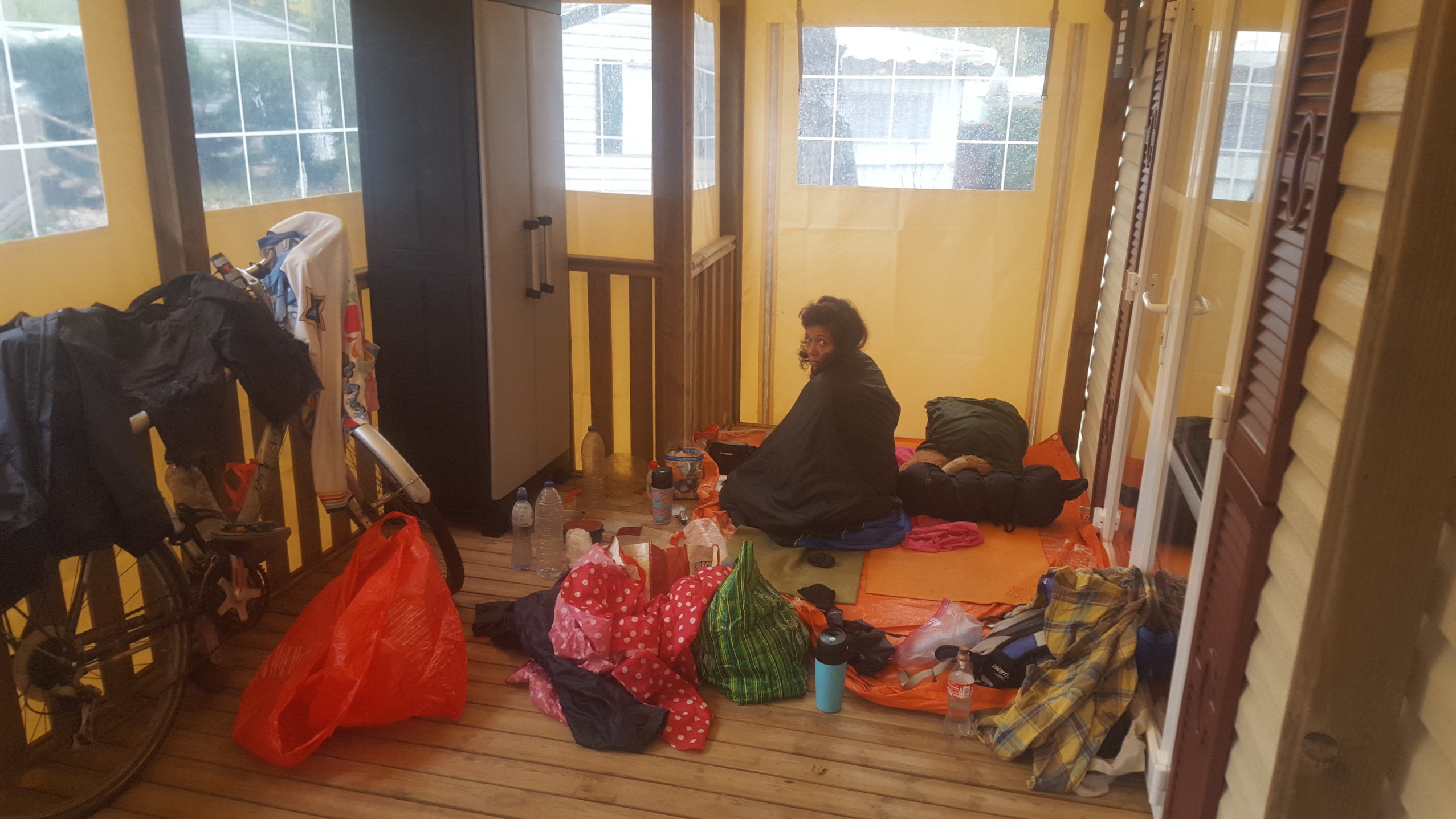 After a morning cycle through forests of happiness, and whispers of sunshine [at last!] we paused and took a coffee break before hopping upon the luxurious ferry to continue our quest of conquering the EuroVelo cycle route as we pedaled towards the Netherlands. 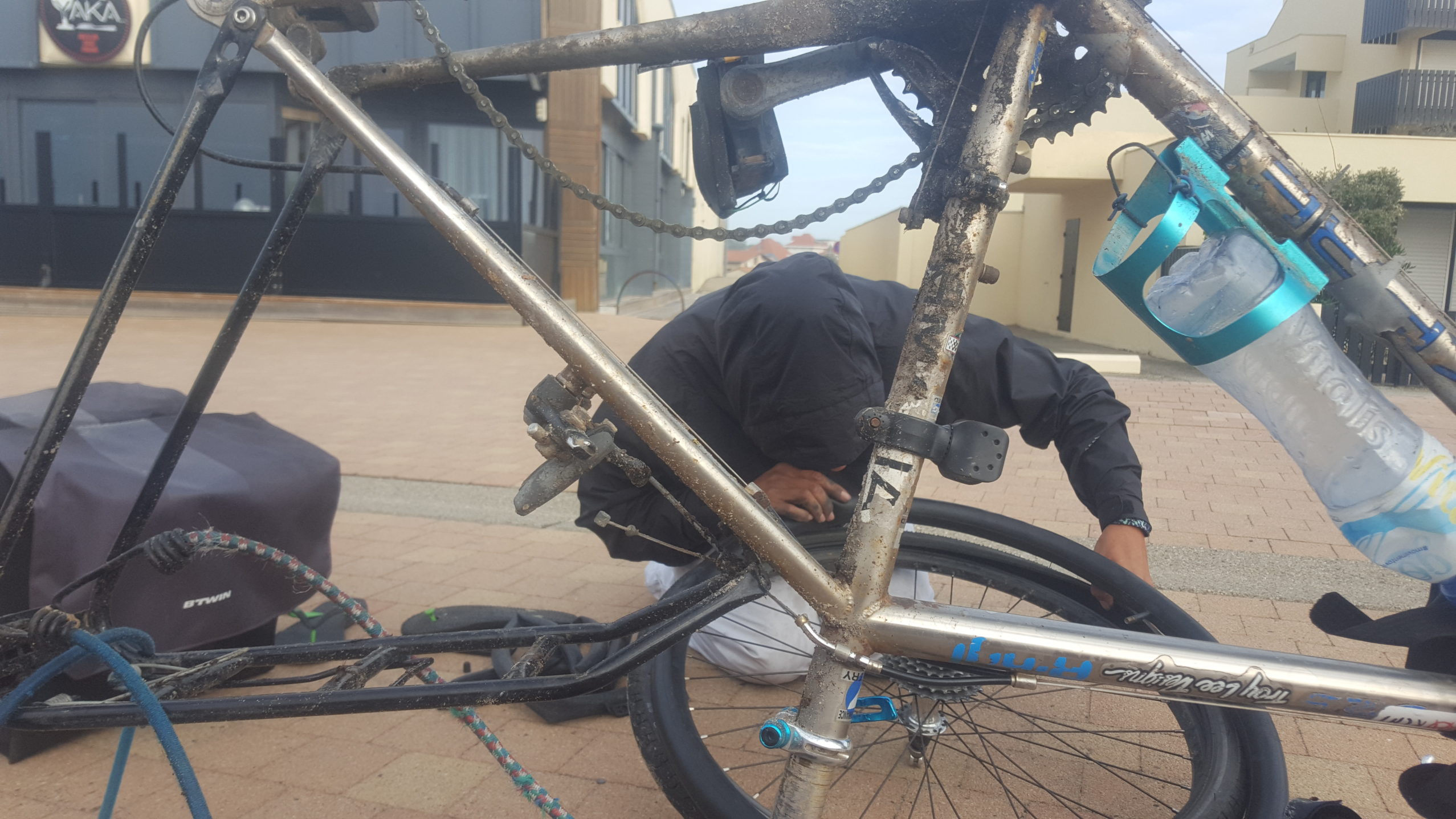 AJ forgot his powerbank aboard, leaving me to do the navigation.
And as we pedalled in the rain, lost (for when God dealt out the navigational genes, he forgot my allocation), and Hangriness got the better of me; we gave up, had a feast on a supermarket bench and then sheltered in MacDonald’s [to charge all our earthly devices and abuse wifi and the toilet] as the sun descended along with our hopes and dreams.’

The evening Aldi bin run yielded nothing.
Sheltered camping was impossible to find, so we sprawled the tarp out in a muddy bog and feasted on cold lentil wraps washed down with warm beer.
My phone died.
And not just the power; without even leaving me a note, it suicided itself.

After another broken day of cycling, we found ourselves on yet another muddy riverbank.
And while it was a clear starry night, it was swallowed by fog as our sleeping bags sucked in the dew.
I couldn’t find methylated spirits for my trangia, so we attempted BBQ starter.
It actually works [slowly], but it left the pot, the stove and everything it touched even blacker than my Nigerian skin complexion.

Cold, wet and tired, we watched the sunrise yet again,
but it was too cold to move.
And our bodies ached.
We tackled the muddiest road in all of Europe and I can’t say how grateful I was to rejoin the bustling highway on the other side!
With music blaring and the sun trying to break through the grey, we pushed onwards.
Another bug decided to die in my contact lens…

…But suddenly it didn’t matter for mentally, something snapped and I decided to make the most of all of the elements.
Life is an adventure, and while it may not always feel that way,
ADVENTURE IS ALWAYS WORTHWHILE!!!

Our bodies still ached.
It was still cold.
My phone (and the bug) were still dead,
But happiness flooded our souls as we sat and feasted outside Danish supermarket, Netto.
Instead of the disbelieving glares of locals, we were greeted and smiled at by all the [jealous] passerbys as we “munchied” our brie and “patatas fritas” [cold] hot dogs.
In fact, we felt so good about life that we delayed our rest day and took the time to enjoy the pedal.
We set up camp in a [mildly damp] field in time to watch the sunset [for a change] with some deliciously unfancy box wine and a feast of couscous.

And in the morning we enjoyed the slow-brewed [instant] coffee and the accompanying feast of semi-fermented fruit and dumpster yoghurt before we took a relaxed day to pedal through to our rest haven:
A little farm B&B retreat filled with great people, regeneration, inspiration, and a shower. 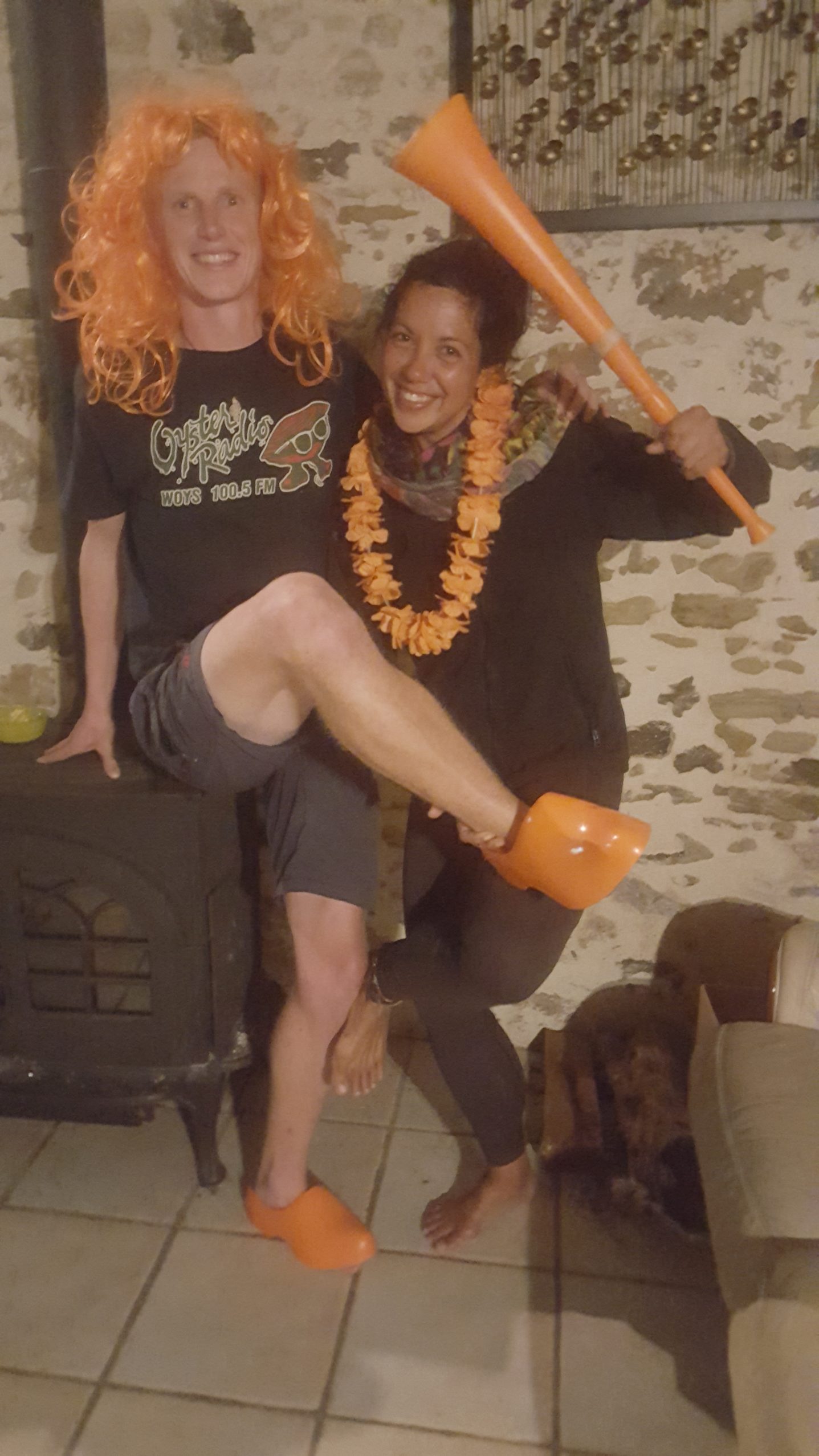 AND did I mention that the Netherlands beat France 2-0??

So to answer the question,
Could there really be anything more romantic than cycle touring France?
Well, yes really…
But despite the mud and rain, the dirt and the cold, the bugs and the exorbitant prices;
It’s a fantastic country built for the bicycle!
And I can’t wait to ravish the second half of it!

Stand on the Sky

“Decide what you want in life and then learn how to ask for it!” Where are you right now? What are you doing? Who is surrounding you? Do you feel like you’re where you’re meant Read more…

Cycling through a Pandemic

YOU DID WHAT!?! Yes yes, I know what you’re thinking… I shouldn’t be travelling at a time like this! But they told us to be safe and stay home. I live on the road… I Read more…

How to Tame a Gypsy

“Any animal that lacks sufficient mind to be flexible in how it responds to its environment cannot be tamed. Jellyfish, for example, certainly cannot be tamed. Earthworms, most likely can’t be tamed. However, some remarkably Read more…