Our three day stop over has just ticked three weeks.
And if you’re not a yachty, you’d struggle to understand how that’s possible!
But delays are all part of the sailing life.
And Namibia is an alright kind of place to get stuck in.

I know what you’re thinking, it’s all desert.
And it is.
But there are some exceptional things one finds in the middle of nowhere.
And there’s something rather beautiful about pure nothingness!

In fact I was awed for all of five hundred kilometers as former crew member, Tim, flew 140 km/h through the dirt roads in our little polo.
Part of that amazement was that humans could move so fast (on the boat we average about 9km/h); but the landscape too left me breathless.
Every twelve or fifty kilometers or so a little mound of volcanic looking rock would jut out or a buck would leap at us just to keep things interesting; but there’s really not much out there. And beautifully so!

Sesriem held both ice-creams (mandatory desert dessert) and a canyon.
I lavished them both and devoured them with all my senses as I explored them to their core.
The former definitely tastes a little less sandy.

Sunsets in the barren land are most certainly worth clambering up large sandy dunes for.
It’s rather dramatic watching the whole world transform in colours and shades as glory hour descends upon the earth and fire burns the sky. 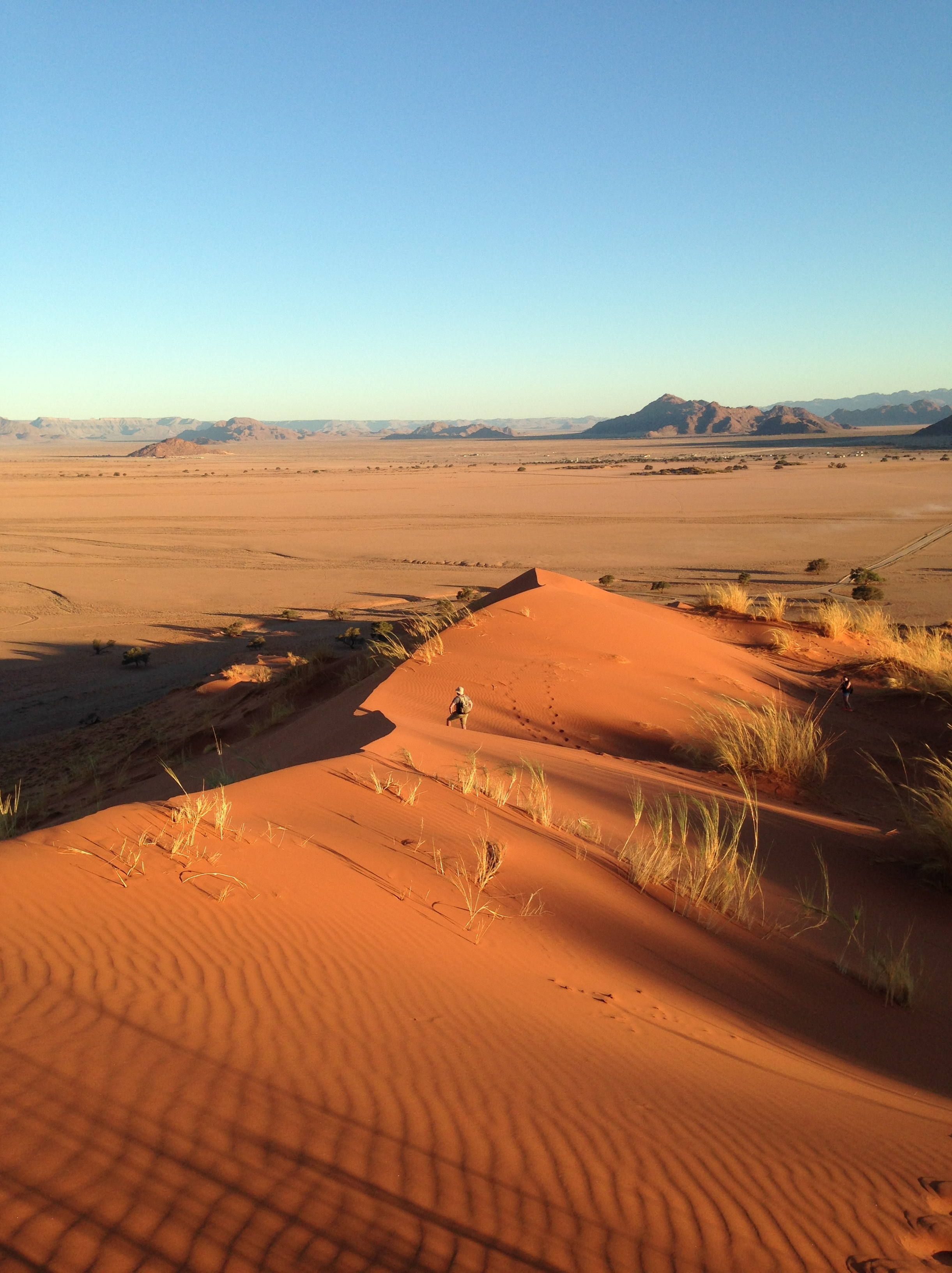 Sunrises are even better! Even if they are cold and mildly misty.
And early.

Fortunately, when you’re early enough you miss the swarms of real tourists 🙂

We drove to the end of the road and began the hike into Sossusvlei.
While everyone else could not believe we were brave and strong enough to do it (they all clambered into 4X4s) – I struggle to think of a more beautiful way to start the day than walking through the desert!

I’d spent a few days in Walvis Bay and could clearly identify the differences between pelicans and flamingos (of which I now know there are both lesser and greater); so it was truly an eye opener having the pleasure of joining the team, mostly safari guides and very-well-schooled bird enthusiasts, on the official summer water bird count.
We raced through and over dunes and salt pans and marshes and dirt; binoculars always on the lookout and feet ready to traipse in for closer inspection.
Who knew there were so many varieties?
And who knew that there were people out there who could identify all 49 of the different species we tallied?
113268 is a lot of birds!

The locals are a colourful mix of tribes and Afrikaaners and Germans and I’ve been very lucky to mingle in most communities.
Actually “luck” is wrong, I’d say I’ve been “blessed.”
Blessed to have met so many beautiful people, blessed to have the opportunity to get my gypsy on! And blessed to have a homely boat (Thank you Morwenna and Hurgen) to row back to at the end of the adventures!
Thank you everyone who rescued me off the rocks, fed me, adventured with me, housed me, let me use your shower (the whole world is grateful for that one), drove me, taught me, and laughed with me!

Namibia has been an exceptional stop; but it’s time to get moving. The ocean beckons!

So, you’re thinking of travelling the US in 2020? But you don’t quite have the funds needed to enjoy your dream vacation? …Or no funds at all… No problem! Here’s my alternative guide to travelling Read more…

Did somebody say “Adventure?”

Adventure  /ədˈvɛntʃə/ noun an unusual and exciting or daring experience. “her recent adventures in Italy” verb engage in daring or risky activity. “they had adventured into the forest” I was kind of feeling that I Read more…

I’m staring at a blank page and it acts as a mirror to my life! Here I am sat in Amsterdam wondering what to do next… Where do I go? What do Read more…